My Story Published In Dadly 2

What Would You Do If Your Kid Asked About Smoking Weed?

Preparing Our Children to Face the World with Integrity and Confidence

I take great pleasure introducing you to a dad and author whom I have followed and been impressed with for a long time; Hogan Hilling, author of Dadly 2.

Anyone familiar with my message knows how much healthy, strong families matter to me. So I take great pleasure introducing you to a dad and author whom I have followed and been impressed with for a long time. The author is Hogan Hilling and I am proud to have had one of my stories featured in his new book Dadly 2. Please read on and check out his book. 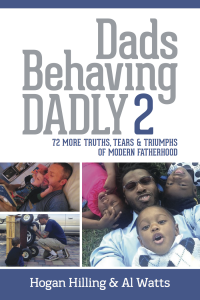 Like Dadly 1, Dadly 2 is a collection of stories written by all types of dads – working, at-home, divorced, single, step, military, gay…dads.  The book includes stories from dads in the USA, Canada, Australia and the UK.

Dadly 2 is available at Amazon, Barnes and Noble and other bookstores.

Hogan Hilling is a proud dad, nationally recognized fatherhood expert, author of seven published books and has appeared on Oprah.  Hilling has co-founded and helped establish several fatherhood networks in the USA since 1992.  Hilling is also the founder of the Dadly Rally Tour Campaign www.gofundme.com/dadlycampaign. Hilling lives in California. Follow him on Twitter @TheDadGuru.

The Power of a Message